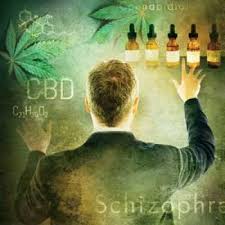 Schizophrenia is a serious mental disorder in which people interpret reality abnormally. Schizophrenia may result in some combination of hallucinations, delusions, and extremely disordered thinking and behavior that impairs daily functioning, and can be disabling ( Mayo Clinic). Sadly, those with schizophrenia do require lifelong treatment that likely means antipsychotic medications. Thankfully, recieving treatment early on can help get these symptoms under control before serious complications develop. By doing so, this may help improve the long-term outlook but it’s worth noting that the antipsychotic medications have toxic side effects. So, the question is, ” what else can help?”

CBD. CBD is the answer.  CBD can help with schizophrenia symptoms. Symptoms related to schizophrenia are delusion, hallucinations, disorganized thinking/speech, disorganized/abnormal motor behavior, and lack of ability to function normally.

“In 2012, researchers published a study in Translational Psychiatry showing that a CBD isolate can treat schizophrenia as effectively as antipsychotic pharmaceuticals — and with far fewer side effects. In this study, researchers led by Markus Leweke, MD, of the University of Cologne in Germany recruited 39 people with schizophrenia who were hospitalized for a psychotic episode. Nineteen of the study participants received an antipsychotic medication called amisulpride, while the other 20 were given CBD. After four weeks, both groups significantly improved. There was no difference in psychiatric symptoms between those getting CBD or amisulpride. But those taking CBD had fewer undesirable side effects, such as weight gain and movement disorders, compared to those taking amisulpride. The authors concluded, “These results suggest that cannabidiol is as effective at improving psychotic symptoms as the standard antipsychotic amisulpride.” Some scientists speculated that perhaps people with schizophrenia were essentially too high on elevated levels of their own endocannabinoids! But in reality, it seems that the brain actually increases anandamide levels to buffer stress and ease the symptoms of psychosis. The preponderance of evidence suggests that the higher the anandamide levels are in people with schizophrenia, the less severe their symptoms. (Project CBD).

If you are interested in reading more of this excerpt from The Essential Guide to CBD, click here.

Do you yourself have schizophrenia? Do you know someone who does? Do you and/or them use CBD as a treatment option? We would love to hear more on the experience.  If you have any questions regarding CBD options, please click here.